Of a Feather: Works by Walter H. Rich

Walter Herbert Rich (1866-1948) began drawing and painting as a child and was primarily a self-taught artist. He perfected his craft and produced exquisitely rendered ornithological portraits. A selection of the artist’s watercolors of New England birds are featured in the exhibition Of a Feather organized by the Zillman Art Museum.

Walter H. Rich served as an agent for the U.S. Bureau of Fisheries in Portland, Maine from 1913 until his retirement in 1936. An avid sportsman and hunter, he illustrated several publications on fish species including “Fishes of New England-The Salmon Family” by W.C. Kendall.

One of Rich’s greatest achievements was authoring and illustrating the book “Feathered Game of the Northeast”, published by Thomas Y. Crowell & Co., New York, NY in 1907.  Along with astutely written descriptions of his feathered subjects, the artist created over 80 illustrations of the land and water birds for his 432-page book.  Several of the works in this exhibition, including: American Woodcock, Harlequin Duck, and Purple Gallinule were reproduced in Rich’s celebrated book. A reviewer for The Nation commented in 1907 that Rich was to be congratulated for being “not only the student and collector of the material for which he writes, but the artist as well”.

Of a Feather was organized with the active involvement of high school students from the Cobscook Experiential Program in Lubec, Maine, who served as guest curators for the exhibition. This educational outreach project was funded in part by a University of Maine Arts Initiative seed grant. The Zillman Art Museum wishes to extend our sincere appreciation to Kendra Raymond for generously loaning the Walter Rich works for this exhibition. 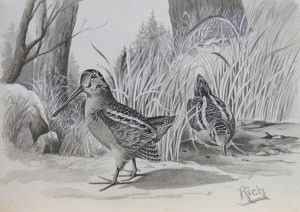 Press Release for Walter Rich can be found here: OF A FEATHER – WORKS BY WALTER H. RICH_PressRelease