Wood Nymphs, features a selection of drawings and large-scale sculptures by JoAnne Carson. Splitting her time her time between Brooklyn and rural Vermont, Carson is known for her quirky, serio-comic works in painting, sculpture and assemblage.

Carson’s sculpture Chlorophylia (For a World Without Color), that rises eight feet tall, is a focal point of the exhibition. The work is light-bleached and ghostly with its oversized, pale colored flowers and branches that stretch to the ceiling. Varied plant species—some resemble stylized hydrangea while others are textural enlarged roses —are assembled in a whimsical manner on a trunk-like base that is perched atop a circular disk.

Wood Nymph, 1999, represents a major work in Carson’s career; a multi-armed, female figure spins pies on the tip of her fingers as she emerges from a nine foot high trompe l’oeil log. The work is a tragic/comic comment on the gendered role of women as homemaker, muse, and force of nature.

The work Blue, 2006, is a quirky three-dimensional piece that is reminiscent of the amped up colors and forms found in a Dr. Seuss book. The flattened, stylized leaves and pom-pom flowers emanate from a coiled electric-blue stalk whose origin is four curved legs that rest precariously on the plinth. Exhibited together these works orchestrate a chorus of invented forest creatures that aspire to transport viewers to a magical, imaginative woodland. 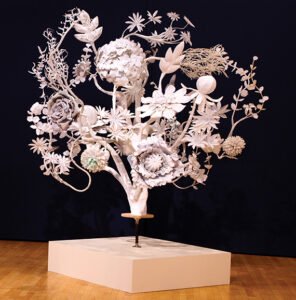 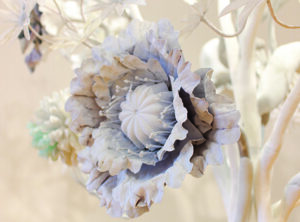