The Soul of It: Anne Arnold

During a time when modernism and abstraction were the mainstream art movements, Anne Arnold followed her own creative path. She remained true to creating honest depictions of her admired animal subjects and the domestic creatures that filled her life. As reflected in the subjects featured in this exhibition, the artist sought to capture the spirit of these varied animals and occasionally people. Her sculptures were created using an array of materials including wood, bronze, terracotta, and resin-painted fiber. The elegant and simple lines of her companion, Monte, a Borzoi or more commonly called a Russian Hunting Sighthound, was lovingly carved in wood in 1988.

Arnold’s unique point of view embraced elements of folk and modernism’s simple lines. Critic John Yau commented on the artist’s fierce individualism: “Such self-contained independence, in Anne Arnold’s case, in particular, should be honored. It bespeaks of a rare spirit, at once tough and gentle, single-minded and generous.”

Anne Arnold (1925-2014) was born in Melrose, Massachusetts in 1925. She studied at the University of New Hampshire, Ohio State University, and the University of Guadalajara in Mexico before moving to New York in 1949. While in NYC she studied at the Art Students League and exhibited her works at Tanager Gallery and Fischbach Gallery. Arnold and her husband, abstract painter Ernest Briggs, acquired a home and property in Montville, Maine in 1961. The couple summered in Maine for decades before Arnold donated the land to Sheepscot Wellspring Land Alliance, a local conservation organization. 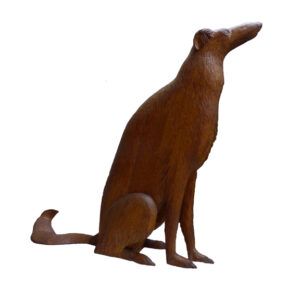 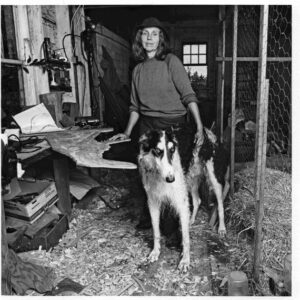