The Fractured Negative showcases a selection of black and white images by Alastair O. Finlay, a photographer who passed away in 2009. Finlay was born in Venezuela in 1943 to English parents and was the grandnephew of Sir William Orpen, a successful Irish Edwardian-era portrait painter. Finlay originally studied art in England and began his career in advertising and publishing. After discovering his affinity for photography at the age of 24, he relocated to New York City to work as an advertising and editorial photographer for luxury brands. However, Finlay was an artist at heart and began to fully explore photography’s creative potential.

Finlay’s images were created by layering negatives during the photographic exposure process. He placed multiple negatives in the darkroom enlarger, instead of a single negative which is most typical. This layering method produced the abstract, fractured quality found in his images. Finlay then scanned the darkroom prints as part of his process so they could be made into archival ink-jet prints, allowing the artist to more easily print in a range of large sizes.

Many of Finlay’s photographs capture scenes and locations in New York City that are superimposed over each other. These layered images evoke mysterious and ethereal feelings, and seem to portray random moments in time in the city. The moody style that Finlay achieves is heightened by the way in which he captures the fluctuating light on varied environments in NYC, which invites the viewer to contemplate the random, fleeting aspects of a bustling metropolis.

Untitled – Abstract Architectural Montage (1997) depicts an array of architectural elements that Finlay artfully layered to create a cohesive composition. Perhaps with a nod to the Constructivist artists, Finlay presents his version of an abstracted industrial modern world. This work contrasts with Mystery House (1995), which also shows his ability to create an alluring scene—but rather than rigid structures the traditional setting seems to emanate a haunting glow. These two photographs highlight Finlay’s skill in achieving a seamless integration of two different subjects in order to advance his creative vision. 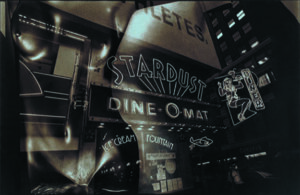 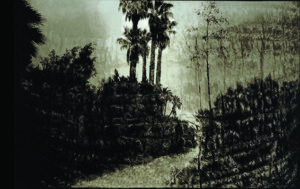