Symphony of Passion offers a glimpse at over 40 years of studio practice by New York-based artist Alison Weld. The exhibition incorporates paintings from several of Weld’s unique series. Prominently featured are large-scale diptychs that represent an important series of works from 1994-2003 titled Home Economics. Boldly painted abstract panels are juxtaposed with mass-produced, patterned upholstery fabric. For instance, in the left panel of Psyche’s Soul,1997, Weld’s brushstrokes have yielded a turbulent tangle of textured, warm-toned marks as if she’s rendered the ferocious energy of a firestorm. In contrast, the composition’s right panel consists of appropriated designer fabric that depicts various butterflies and moth species. Instead of being quiet, saccharine depictions of winged creatures, the complex, frenzied pattern of layered insects balances beautifully with the raw energy of the abutted oil on canvas. While the surface texture and imagery on the two panels are vastly different, the diptych is unified through the warmth of Weld’s palette on the left and the orange, earthy hues of the butterfly’s wings on the right.

With roots in Abstract Expressionism, Weld’s Tonal Variation series is characterized by a richness of mark-marking and the gradual buildup of lush textural surfaces. The artist refers to these works as “assemblages” in which she brings together newer paintings and older works to investigate new relationships—while also recontextualizing the past. Metabolic Histories, 2015, is a stellar example of the Tonal Variation series in that it apposes five separate energetic canvases. This composition will be dismantled during the exhibition and, at various intervals, three of the canvases will be paired with their original panels to form distinct new compositions. Metabolic Histories is a vehicle for viewers to witness the sort of experimentation that is most commonly seen within the confines of an artist’s studio. 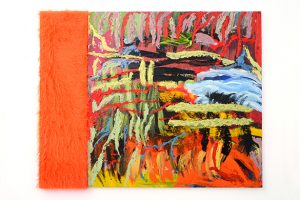 Courtesy of the artist