Watch the Birdie! features over 40 black and white photographs by Roman Franc, who lives and works in Brno, Czech Republic. Franc explores both individual subjects in his work —such as a series of portraits of his brother at various ages —and images in which he orchestrates large groups of people.

Franc’s ability to harness the nuances of available light for his creative purposes, as well as his unwavering attention to find the perfect setting for his compositions, keep his portraits centered within the realm of fine art. His photographs of people, many of whom are personally known to the artist, range from the sensitive to the absurd, and from the humorous to the disconcerting. For instance, in Portrait Series-Twins, Franc has snapped an image of two young twin girls whose makeup-covered faces emerge from the darkness. The blank gazes of the girls and blackened circles around their eyes border on the macabre.

In several images, the artist enlists unclothed subjects who, when placed in the artist’s unique settings, evoke the absurd. These works bring to mind luminary Diane Arbus, who’s frontally positioned subjects exude self-assurance in their nakedness. In Memories, Franc depicts two nude brothers with strikingly pronounced tan lines standing in what appears to be an unforgiving desert, yet they reflect a calm coolness despite their unfortunate condition of being severely sunburned.

Pictures such as these require the ability of the artist to create relationships with their subjects and garner trust at break-neck speeds. Franc’s affable nature and the passion that he exudes for his work instill a confidence in his subjects that allow them to reveal themselves with vulnerability and honesty.

The Zillman Art Museum (ZAM) greatly appreciates the generous support of the Ministry of Culture of the Czech Republic for its support of the Watch the Birdie! exhibition. 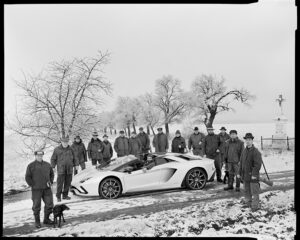 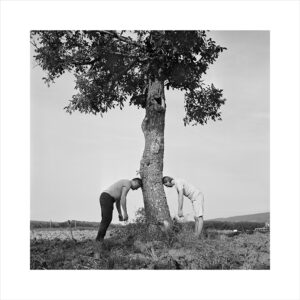