Pop Art and Influence – Selections from the Permanent Collection

The Pop art movement has enjoyed a long tenure, from its inception in the early 1950s and rise to prominence in the 1960s, to its continued relevance decades later. Early practitioners embraced elements of popular and commercial culture as source material for their work. The pervasive vocabulary and unique style of Pop art continue to influence many artists working today.

The Zillman Art Museum collection features numerous works by early Pop art luminaries such as Richard Hamilton, Andy Warhol and Roy Lichtenstein, while also including works by a new generation of artists who are extending and redefining its tenants in new and inventive ways. Pop art’s continued impact on post-modernist aesthetics is reflected in the work of artists such as Alisa Henriquez, Hannah Cole and Jim Darling.

Known as seminal figures of the Pop art movement, Warhol and Lichtenstein are celebrated for exploring the relationship between fine art, advertising, and consumerism. Warhol’s screen print Flowers, 1970, marks a sharp yet refreshing departure from his typical depictions of consumer items. Four flowers composed of bright and bold orange, yellow, and purple sit on a bed of abstract grass. Warhol experimented with the silkscreen process by layering imagery with different color combinations to achieve his vision of unidentifiable hibiscus flowers, in order to create an air of mystery.

Polaroid photographs of prominent celebrities, such as Farrah Fawcett, Margaret Hamilton (the Wicked Witch of the West), and Jack Nicklaus, were often used as source material for Warhol’s more complete screen prints. They serve as a testimony to his ability to find beauty within all he encountered. The photographs capture each celebrity at a moment of vulnerability and strip down the glamorous layers to showcase a heightened realism that only a camera could record.

Roy Lichtenstein’s, Reverie, 1965, is characteristic of the artist’s renowned comic book style. In this bold composition, a woman’s face is layered with Benday dots as she sings longingly for her lover. What was meant to be a testament to the artist’s love for jazz transforms into a piece that highlights the way in which Pop art, in the form of a comic strip, can fit in with fine art. 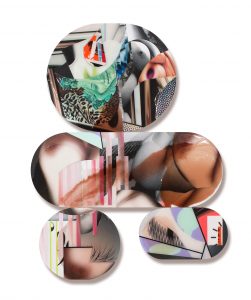