Throughout history, artists have been attracted to Maine for its striking landscape, quiet remoteness, and resilient people. As we celebrate Maine’s Bicentennial in 2020 and the state’s rich artistic history, the Zillman Art Museum (ZAM) showcases artists who have not only contributed to the cultural fabric of Maine, but whose works of art are lauded internationally.

Featured in the exhibition are an assortment of works from the ZAM collection including two of Winslow Homer’s finest prints, Eight Bells, 1887 and Perils of the Sea, 1888. John Marin, whose studio in Maine was on a picturesque point in Addison, is represented by two dynamic watercolors, A Bit of Cape Split, Maine, 1940 and A Bit of Stonington, Maine, 1926—as well as a suite of etchings that attests to his skill in both representation and abstraction.

One of Maine’s most prominent artists, Andrew Wyeth, is featured in two lovely watercolors gifted in 1948 by Bangor’s Wing Sisters, Adeline and Caroline. The exhibition also highlights three images by Berenice Abbott, one of photography’s greatest practitioners, who relocated permanently from New York City to Blanchard, Maine in the 1960s. Also included are contemporary works by Alex Katz including Ann Lauterbach, 1977 and Swimmer, 1974 – two pieces that illustrate his distinctive, pared down approach to portraiture. 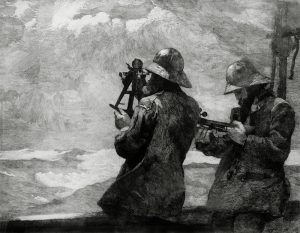 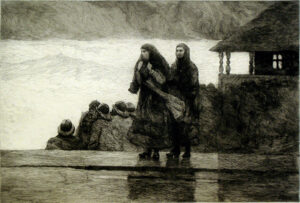