George Lloyd (Portland, ME) will present a series of small works and sketchbooks completed in the early 1980s. The works combine saturated hues with subtle representations of common objects and environments.

The artist describes this period of work:  “I left San Francisco in June of 1982.  ‘The Transition Years’ refer to the two years’ time immediately following, when I moved around, rather fitfully, from one location to another in the Northeast, before I eventually settled in Portland, Maine.

The fast-paced character of the artistic work which I accomplished – much of it on paper and in sketchbooks – directly reflects my then peripatetic condition.  The “transition” might also refer to a more fundamental change  – from the tightly controlled, geometric style of my early ‘80’s’ period in San Francisco, to a different manner of working which was looser, more atmospheric and painterly.

The eight very productive months which I spent in Bangor in 1983 were my longest stretch in one place.  At that point, I was 37 years old, and living with my parents in their small house in Brewer, as well as working in a studio space which I rented in Bangor, over a bagel shop on Central Street.

I also managed to work intensively – mostly on paper – during my teaching stints, both at Wesleyan – summer 1982, and at Cornell – fall 1982 and summer 1984.  At Cornell, I discovered a book on the drawings of Francesco Guardi – the 18th century Venetian painter who has remained an inspiration to me ever since.  Almost 20 years later, I continue to bend in the direction of the painterly tradition of Venice.” 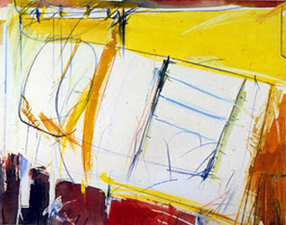