CHINA Exploring the Interior, 1903-1904
(Sponsored by UMMA and on view at the Bangor Public Library)

CHINA: Exploring the Interior,1903-1904 is a traveling exhibit produced in association with the Chinese Room of the Newport (R.I.) Public Library and the Maine Humanities Council.

In 1903, R. Harvey Sargent, a topographer with the U.S. Geological Survey, joined a Carnegie Institution research mission that took him 1,800 miles across the vast interior of China. Along the way, Sargent documented his observations with photographs of the land and the peasants from which the Chinese Revolution was to come.

The core of this exhibit consists of 74 of these original photographs, which have been enlarged and reproduced to museum standards. Also included in the exhibit are the published findings of the geological mission, Sargent’s journal, a map of the expedition, and other memorabilia. 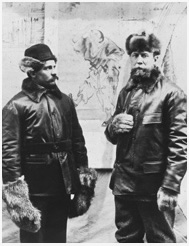