Domesticated features a selection of photographs by Los Angeles-based artist Amy Stein. The artist employs the contradictory nature of photography as a means to record factual evidence, as well as a medium for expressing fictional narratives. According to Stein, the images in this series are based on real stories from local newspapers, interviews, and oral histories gathered from 2005-2008 in and around Matamoras, Pennsylvania.

These photographs capture stories of intentional and random interactions between the residents of Matamoras, and the wildlife inhabiting neighboring state game lands. Stein’s attentively staged scenarios document these stories—presented as chance encounters that act as “modern dioramas of our new natural history.”

The scenes invite the viewer to consider the contradictions in humanity’s desire to connect with nature, alongside its resolve to tame it. The artist explores the incongruent notion that “humans choose to live on this border to experience that connection, but then practicality demands they build barriers to keep the wild away.” The expansion and construction of domestic spaces, as evidenced in Stein’s works, results in a loss of wildlife habitat.

Struggle (2008) captures an imposing bear seemingly wrestling to remove an opaque plastic bag from its head. The solitary creature, with its menacing teeth exposed, stands in an expansive field under overcast, dismal skies. The scene comments on the disposable nature of society and the impact of pollution on wildlife. The taxidermied bear becomes a symbol of an ecosystem in flux and on the edge of peril. Other images by Stein, including Hillside (2007), Howl (2007), and New Homes (2007), reiterate this theme in which animals are forced into a spectator’s role as the changing environment threatens their existence. 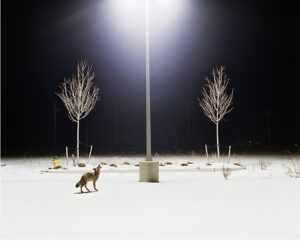 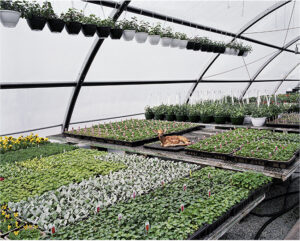