New York City-based artist Kit Warren showcases an assortment of recent works on paper and canvases in Altered States & Other Stories. While rooted in abstraction, these featured works suggest a multitude of associations ranging from aerial views of land masses to microscopic petri dish worlds to petroglyph imagery. Warren states, “Whether looking inside or out, at blood cells or land mass, my work examines the relationship between scale and pattern. Small patterns intimate the behavior of larger ones; repetition unifies.”

The techniques and materials employed by Warren are captivating. Her forms emerge from meticulously painted, innumerable various sized dots. The exhibition features a large-scale triptych titled Continental Drift (golden passage) that was created in 2022 especially for the Zillman Art Museum exhibition. The painting measures over 13 feet and is loaded with intricate details and implied movement. This work inspires a question; can a work be both invigorating and meditative?  While the triptych is maximalist in execution and brimming with visual information—depending on perspective and viewing distance—it also offers a meditative experience. Adding to the complexity is Warren’s use of materials including metallic acrylic, powdered metal pigments, and backgrounds of velvety matte color. The sensation of movement in Continental Drift (golden passage) is accentuated by the incorporation of shimmering gold and copper paint in contrast to more flat paint passages. The artist states, “Because the reflective marks sit on top of the matte surface they’re very sensitive to both ambient and direct light. As the viewer walks around the painting, the changing angle of light on the painting activates the inert surfaces, creating a dynamic of time, movement and light.”

The attractiveness and strength of these selected works is that they conjure an array of association.  Patterns created by the painted dots appear to create elaborate ornamentation, like overlapping stands of arranged beads. Shapes defined by the artist’s repetitive dots also evoke organic associations—microscopic forms that are in a state of metamorphosis, or plankton navigating fluid expanses with flagella-like appendages. Warren states, “Much in the way that millions of microscopic cells make up a droplet of blood, or thousands of blades of grass make up a green patch of earth, random repetitions eventually coalesce into larger patterns.”

Kit Warren received a BFA from the University of Pennsylvania and a MFA from the School of Visual Arts, New York City. 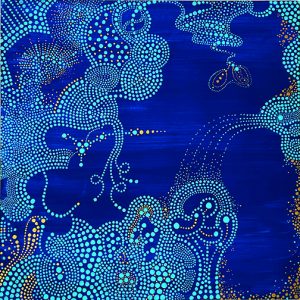 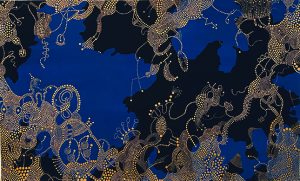