A Vision Accomplished features a selection of prints and paintings by Thomas Cornell (1937-2012), a former art professor at Bowdoin College who spent many years in Maine. The exhibition spans the breadth of the artist’s creative practice across forty-eight years, highlighting his skill as a painter and virtuosity as a printmaker. As displayed in this exhibition, Cornell was accomplished at rendering his subjects in striking detail and with emotional complexity—yet he also captured a simplified essence of his subjects through energetic, gestural marks, and a non-traditional use of color.

Cornell’s renderings of animals, specifically Snapping Turtle, First State, 1968, provides an in-depth view of the artist’s distinctive process and prolonged consideration of a chosen subject. Viewers witness Cornell’s exploration and the range of his mark-making across three images of the same subject—a snapping turtle executed in various states. In the first depiction, the reptile is portrayed in elegant etched lines; the second is a gestural interpretation in warm-brown ink; while the third is an etching with aquatint that contains a wide spectrum of subtle values.

Throughout a period in which abstract expressionism predominated the art world, Cornell’s interests remained confidently grounded in classical pursuits. In Smiling Satyr, 1968, the artist represents a fanciful creature through a tangled web of etched lines. The satyr flashes a playful and mischievous smile to the viewer. The extent of Cornell’s vision and ideas is apparent in the mythological references that permeate this work.

Dionysian Sketch with Father and Child, 1981, depicts unclothed figures that often populate Cornell’s compositions—scenes in which the human form is presented within communal and idealized landscapes. These intergenerational figures frolic, tend the fields and gardens, and bask in nature’s beauty. The artist creates an intuitive painting that is a celebration of nature as a benevolent authority, teaching rationality to young minds.

Throughout his long career, Thomas Cornell remained committed to figurative art, and to the spirited narratives that underpin many of his compositions. The artist employed classical mythology stories frequently in his work to emphasize the importance of nature. This reflects the way in which he utilized art to inspire an emotional response to nature’s beauty and affirm the environment as an essential component of a flourishing society. Cornell’s use of expressive marks, vigorous brushstrokes, and idealized forms provided a voice for the artist’s distinct commentary on environmental justice. 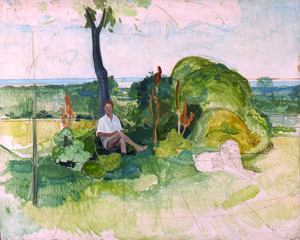 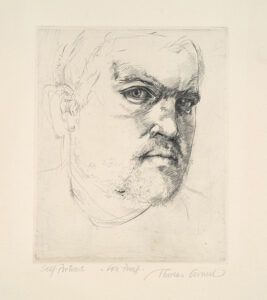